I am an immense fan of Jane Austen’s work, and love seeing film adaptations of her novels reinterpreted over and over by different directors and actors (except for the zombie issues…no thanks). I never tire of watching these films again and again. Besides engaging in the narrative, one of the elements that I also adore is seeing the slight differences from film to film of the costume interpretations in Jane Austen’s era. I love the feel of a fine muslin next to my skin, but except for the empire waist and detailed bodices of the gowns I see in these films, I don’t see myself ever wearing such flowing gowns. The jackets, however, are another story… I think the coats and jackets of this era are sublimely constructed, and this is a fashion element that I am consistently in awe of in these films. The military uniforms of this era are extremely detailed, and some of the tailored elements of these coats are relflected in some of the short, cropped jackets the women wear with their gowns. In the book Fashion at the Time of Jane Austen, by Sarah Jane Downing, this jacket style is described as a the Spencer, named so from an incident involving a Lord Spencer who singed his coat tails while warming himself by the fire; he removed these singed tails and liked the way the coat looked, so continued to wear it without the tails. This perceived new look became popular and found its way into women’s fashions where the cropped, fitted jacket of the era came to be.

I think the Spencer’s tailored look in the women’s fashions, with its fitted and masterly constructed bodice, perfectly complements the gown empire waist styles of this era. I especially love all the tailored details such as the high collar, capped shoulder, cuff, and intricate seams worked into them. This type of jacket construction is certainly on my list of garment sewing methods to master, as I would certainly love to wear a version…or two or three of these!

With my keen, repeat observances of the detail in such a period garment it’s no surprise then that I eventually ended up noticing a reprisal of one particular Spencer jacket over three different film adaptations of Jane Austen’s novels. In particular, a dove gray version with burgandy velvet collar, cuffs and matching buttons caught my eye. 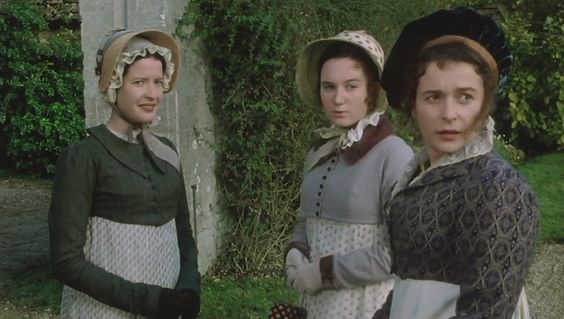 First sighting: Kitty Bennet, centre, in a dove grey woven Spencer jacket with velvet collar and cuffs. This image from the fabulous 1995 BBC production of Pride and Prejudice.

Third sighting: The gray Spencer jacket on the character of Miss Jane Bennet (here as Mrs. Bingley) in a 2013 British adaptation of the P.D. James novel  Death Comes to Pemberley

Interestingly, I was lately spending a few evenings viewing the 1995 BBC Pride and Prejudice series adaptation on bluray while working on this blog post, and I noticed that another jacket version found its way into another adaptation: if you look at Charlotte Lucas in the first photo above, she is wearing a green version which, in the third successive photo above, also gets worn by Elizabeth in 2013’s Death Comes to Pemberley. Worn from 1995 to 2013 – a near twenty year span! – these particular jackets are a testament to the fine tailoring techniques and fabrics used for “costumes” in a film. I think it’s great to see such fine garments making appearances in other films. They may be classified as costumes in the film industry, but to my mind, these jackets remain as fine examples of tailoring and couture work.

For a bit of fun, here are a few photos of a cropped sweater I’ve had for several years that I love; this look was inspired by the high waisted fashions of Jane Austen’s era. My “Spencer jacket” version is a lace knit, but to my imagination it carries an air of Jane Austen’s era.

I bought this little lace sweater nearly a decade ago and still enjoy wearing it. It’s a favourite of mine and has been one of my most reprised pieces of clothing!

Yes! Sandals…crop top…tailored, fluid trousers…. All in all a beautiful day to wear my recently completed work!
More details of my recent boatneck top done in same jersey as the swing skirt… I used vintage Simplicity 2522, view #3 (circa 1958!).The basting thread details are going to be removed so as to preserve that lovely drape this jersey is working in the body of this top. {When I made the denim version, the darts were utilized to give a more tailored/fitted shape effect…}
More jersey knit loveliness!!
The vintage pattern I’m working my latest jersey top from….my previous post showed the wrong pattern photo. 😊 Still, an amazing pattern!🖤
Balance of drape:
The backstitch….